On my way from Freiburg to Berlin, I took a one-day detour to the city of Aachen. Aachen is located at the Dreiländereck (“tripoint”) between Germany, Belgium, and the Netherlands. It’s also home to the E.ON Energy Research Center, a public-private partnership between RWTH Aachen and one of Europe’s biggest energy companies. I went to conduct some interviews at the research center and did some tourism in the process.

It took about nine hours to get from Freiburg to Aachen by bus. Luckily, I made a friend who kept me company during the journey. There happened to be three Telugu speakers on the bus (Telugu is the language I speak at home), and when I heard them, I immediately introduced myself. Not that many people outside India speak Telugu, so we tend to bond when we find each other. One of the Telugu speakers, Sindhu, ended up sitting with me. She’s a master’s student at RWTH and so was also headed to Aachen. Given that our bus wasn’t a direct bus to Aachen — we were connecting through Frankfurt — this was actually a huge coincidence. Sindhu’s younger brother had just started his master’s degree in artificial intelligence at ETH Zürich, so Sindhu and her husband were bringing him to visit their home. (This was actually another coincidence, since it meant Sindhu’s brother and I had applied to some of the same grad schools in the same field at the same time. What a small world!) Sindhu gave me advice and suggestions for my stay in Aachen, and also shared some tasty Indian snacks. (I was especially grateful for the snacks, since German food is relatively bland.) We said goodbye after getting down in Aachen, but only after stopping to take a picture of the site where a World War II bomb had been discovered just days before.

Once I got to my hostel (Backpacker Hostel Aachen), I was greeted by a man named Mike. As I’d find out in a conversation later that evening, Mike is an air force veteran who was in the US for a while. He was known for wearing bear ears while flying planes, which caused some hilarious confusion among his comrades. Mike spent some time familiarizing me with the hostel’s rules, amenities, and surroundings, which was really nice. 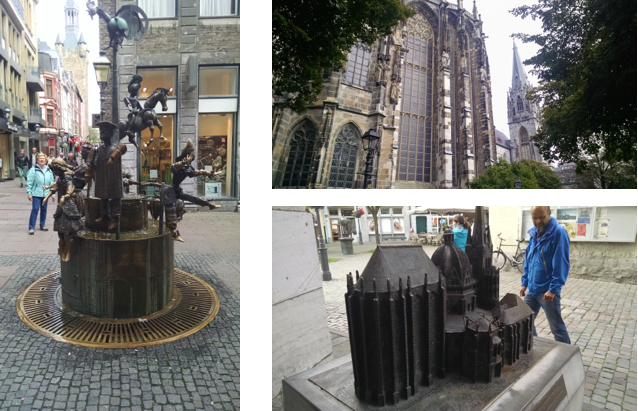 Pictures from my exploration of old Aachen. On the left is a fun statue/piece of artwork I found. On the right are the cathedral (top) and a model of the cathedral (bottom).

I then walked to the RWTH E.ON Energy Research Center building for my meetings. The newer parts of Aachen were developed around the university, and it showed. During my 45-minute walk, I saw at least four different offshoots of the RWTH campus. I lunched in between my two interviews at Aachen’s famous Pontstraße, a street full of fast food restaurants that caters to the college crowd. Based on a recommendation from Kathrin (my Freiburg sublessor, who’s originally from Aachen), I ended up going to Kathy’s Frietenesse, a Dutch restaurant where all the food is fried and served with various sauces. Both interviews went well and the food was good, so I was in an extremely good mood. 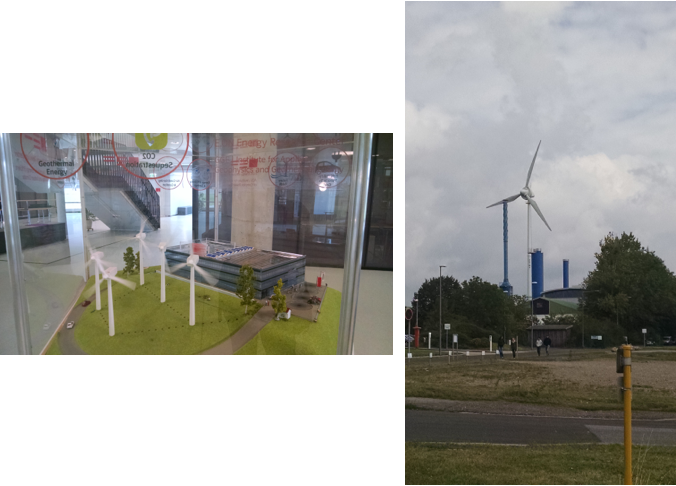 The E.ON Energy Research Center offshoot of RWTH Aachen’s campus. There was a model of the campus inside the building (left), and it was impressive to see the windmills in real life (right).

Afterwards, I took a short local bus ride to Vaals, Netherlands to check out the tripoint. From the bus station in Vaals, I hiked about 40 minutes to the tripoint, partly through residential streets and partly through forested area. The streets were empty because of a slight drizzle, and I was the only one at the tripoint for most of my time there. The solitude and the casual border-hop made the experience feel like an adventure.

Pictures from my visit to the Dreiländereck. I climbed a tower on the Netherlands side and got some good views (top left). The welcome sign to the tripoint was in Dutch, since I approached from the Netherlands side (bottom left). I initially thought the tripoint was in between the three flags stationed past the sign (top right), but it was actually marked by a cement marker. I got a local strolling by to take a picture of me at the actual tripoint (bottom right).

Early the next morning, I climbed onto another bus to embark on a ten-hour journey to Berlin. Though it was pouring rain most of the time, the weather cleared up towards the end of the ride. There were also a number of beautiful wind farms on the way. It felt like a fortitutous beginning to my time in Berlin.

A wind farm I saw on my way to Berlin.